Can it be? Fourth Day on the Road and Still in Texas?


A virtual tour of the Math Bus

These days I'm having trouble connecting the end of one day with the beginning of another; many things about the world when I fall asleep are missing when I wake up. In the early morning of our 5th day on the road, I woke up shivering from the intermittent blasts of cold air coming in the window located next to my bunk. All I could do was wonder what had happened to the tropical air of Austin that I had been enjoying just after sunset. I rolled over and went back to sleep. Upon waking for the last time I decided it was time to get up, and at first glance I didn't recognize any of my surroundings. Apparently my Dad and Shane had been busier than usual. The first load of trip laundry was in the drier, Shane was cutting 2x4s, and the bus was in the midst of an overhaul. Luckily my wits and my sense of humor were where I left them, so I turned the metaphorical key in the ignition one more time.

My fully awake senses tell me Texas is beautiful. I'm sorry for any of you who can't separate the landscape from the people in your connotation, because you are missing out. Readers let me tell you: there are carpets of wildflowers crowding the highways, reliable charismatic hawks, and meadows of tall grass that dance and reflect the sun off their luscious stalks. I have even seen a few serene young bulls (probably named Ferdinand) lying in the shade, deliberating quietly on the gustatory qualities of the plants within reach. I'm just saying, being on the road through Texas has been a sort of lesson for me.

Another thing I like about Texas is every Boys and Girls Club has its own unique properties. This makes a certain amount of sense right? Each is dependent on so many separate variables, not just the individual children and staff. So, what I'm getting to is that today's show was another first of sorts. At the Jim and Barbara Morefield club, we started around 4:00 pm with an audience of just 30 kids, and past 5:00 pm I found myself willfully breathing deeper to calm my nerves. 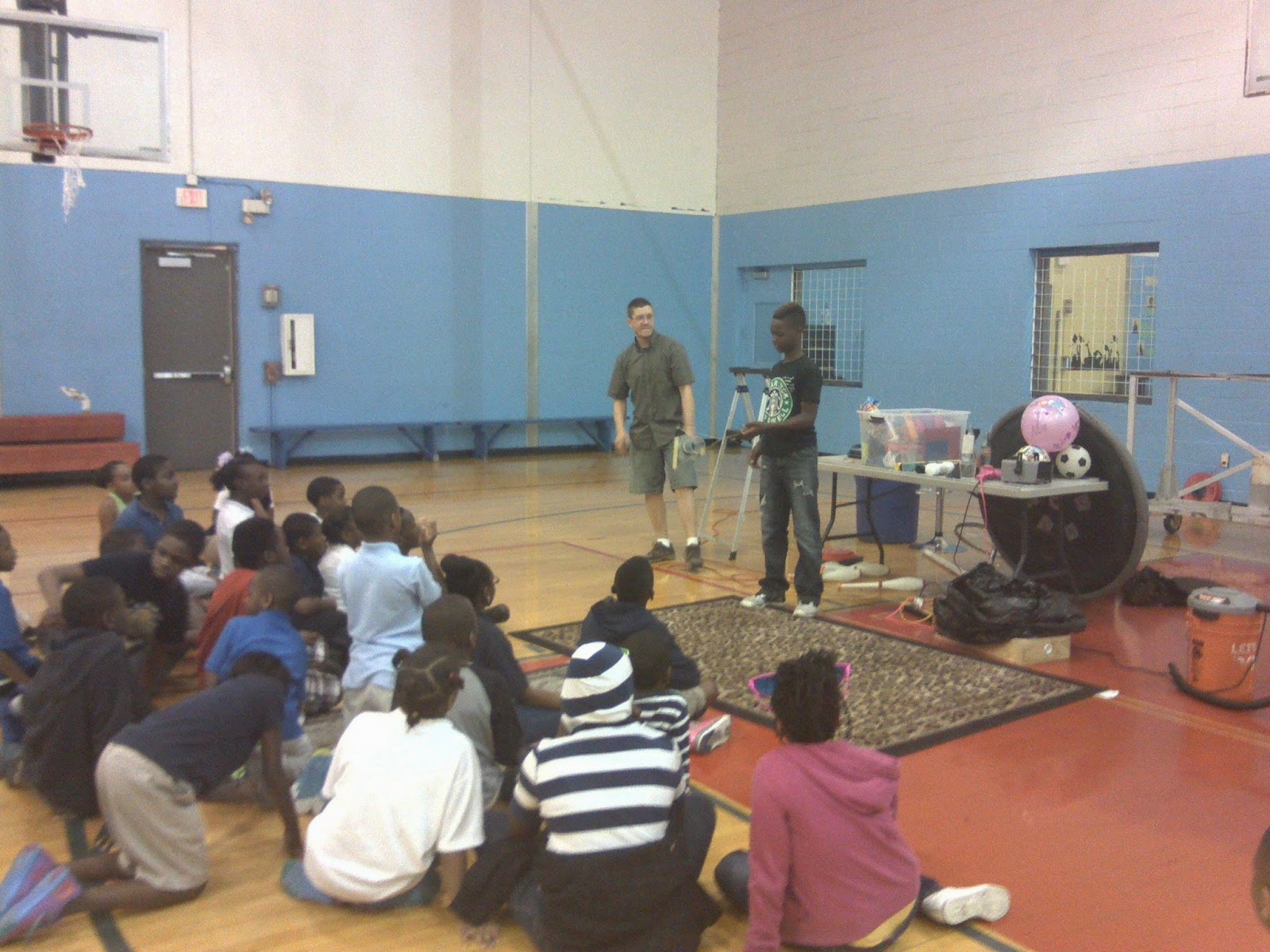 What happened? Well, the regular show, but with our most energetic audience yet. There are certain points in the routine where we know the kids are going to get into the demo, but today's excitement even exceeded that of San Angelo two days ago. We were, as my Dad put it, compelled to become Jazz performers; we had to improvise methods by which we could still carry out the show, but in circumstances far different than that we were used to. The ultimate off the cuff trick today came from my Dad: he blew us away by climbing to the top of the step stool with the toroidal vortex generator (inside out trashcan with hole cut through bottom), and firing off a series of rings higher than most of the kids could jump. The same materials, just used in a new combination: tweaking the variables, you might say. I dare to summarize that today helped me see the show as a big experiment.

The rest of the day was made up of Freebird's burritos, fitness, and frozen treats. Shane's friend made another great recommendation for a place to grab some food in Houston, and we let him direct us to Freebird's burritos. After finishing three monster burritos, we headed to a park to make use of Shane's PVC gymnastic rings. Once fully pumped/toned, we each devoured a cup of Amy's Ice Cream (guilt free), and bothered the folks at Freebird for the use of their Wifi.

I'm going to sleep like a baby at the Love's truck stop.

I was busily reading The Art of Loving by Erich Fromm when my attention was grabbed by something disturbing in the upper periphery. My eyes showed me something I wasn't inclined to believe: A semi truck cab facing us, but driving 50 mph in reverse. I came up with the working hypothesis that this cab was being pulled by another semi, and began to calm down.

After leaving the Morefield Club we ran into (just a figure of speech) a boy riding his horse home from A to B; his daily grind, I suppose. 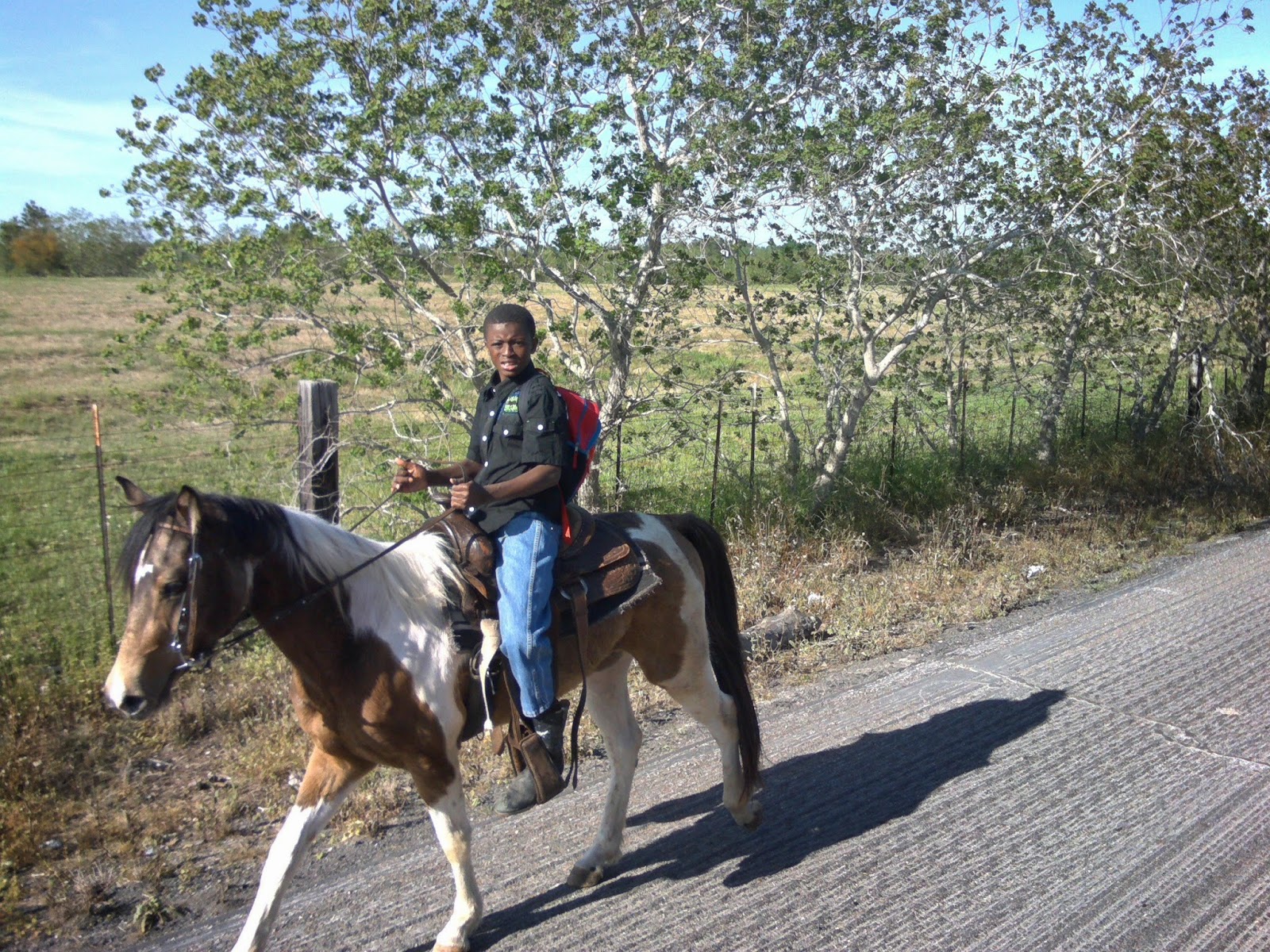