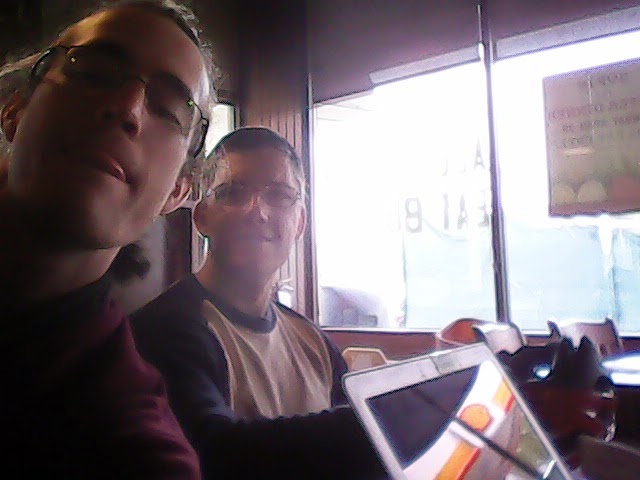 Good morning ! What a wonderful sleep; I certainly couldn't complain about the smell of breakfast which accompanied my waking. Someone had made scrambled eggs with mushroom, complete with toast, and bacon. When I had taken a shower, and changed clothes, I found everyone still sitting at the table happily digesting. I could tell that this wasn't going to be a day where we rushed anywhere, so I got outside a plate of my own in a leisurely fashion. In fact, we had so much time that we even got to do a load of laundry while staying with Shane's Aunt! What did they ask for in return after all this hospitality? Well, nothing that strange: just that we help take a recliner back to their neighbor. I decided this was perfect blog material, so I pulled out the camera. When I had finished shooting, I smiled as I thought about how maybe our presence had transformed this manicured community into a rather interesting place. 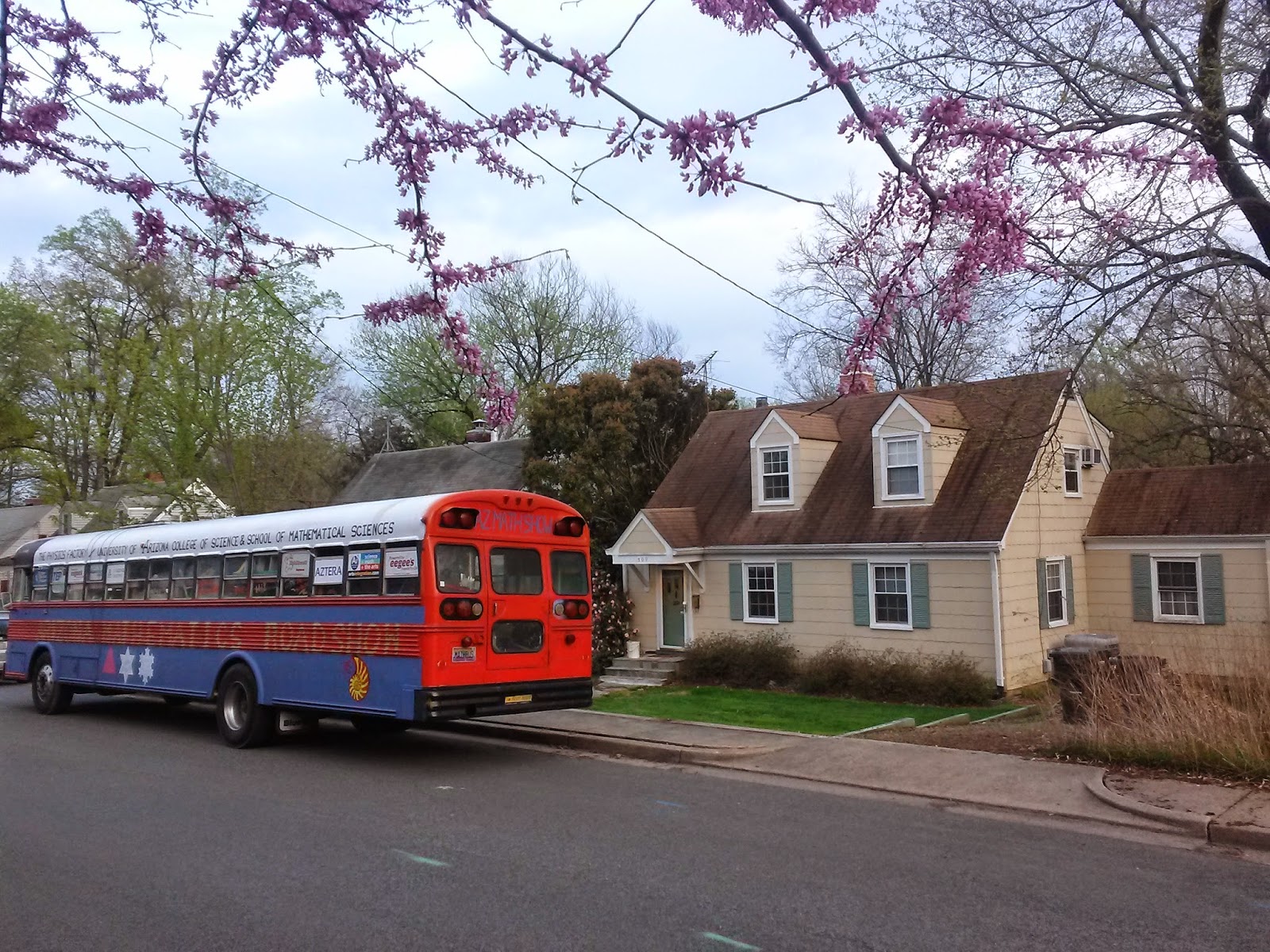 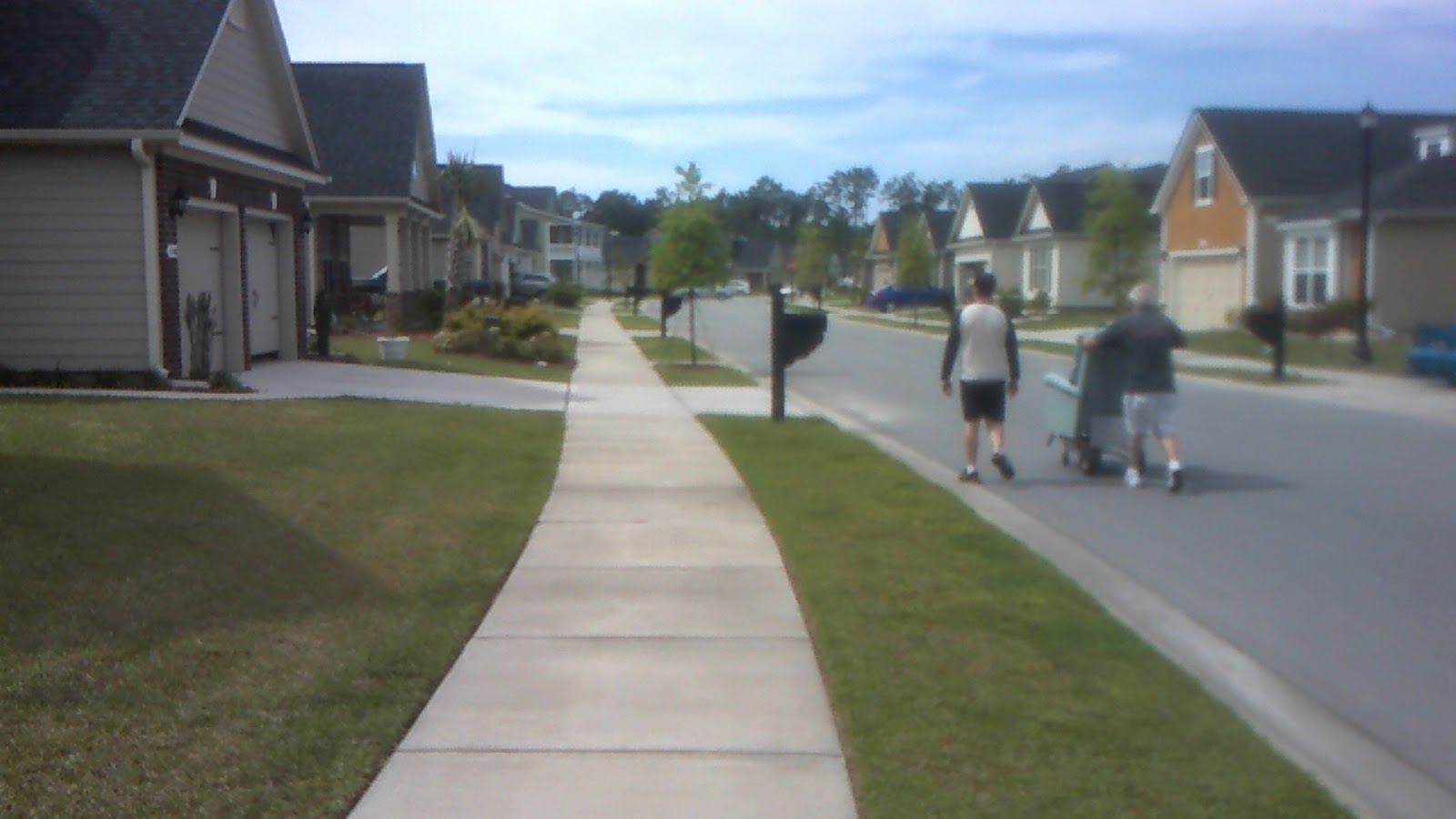 Mischief managed, we then hit the road once more heading North, and put in a days worth of driving again. The day lacked any real punctuation, and once we had loaded some P.G. Wodehouse onto the radio to provide company for my dad, Shane and I both took afternoon naps. Waking up some time later in the evening, He and I noticed that the bus was no longer the only vehicle moving far below the speed limit: we had run into some serious traffic. All of us waited quite a few minutes before receiving any clue as to what had created the delay. Presently, the metal clot steadily dissolved, and by that time
we saw several state troopers pulled over at 20 yard intervals. Forward another standard 20 yards was the crisp remains of a compact no longer distinguishable my make, or model. I dwelt upon this scene even after stopping for the day, and brought one thought to the surface: perhaps speed on the interstate is a pool on which we all draw upon, and when one party exceeds their allotted share, the pool shrinks to create droughts in the form of traffic jams. However, situations like these are as intense as they are brief, and I surrender myself to the mystery on the side of the road.

My sleep held no fiery crashes, and pretty soon I joined the ranks of the living in where we had stopped the night before. Not for the first time, I woke to discover my Dad and Shane had made tracks, and were no doubt off doing something productive. Soon after finishing two bowls of  cereal, I learned from my Dad that Shane was pants shopping, and would be back soon enough. In the meantime, he said I could go check email at the restaurant inside the TA truck stop if I wanted. While sipping a hot chocolate, I caught up with things electronic, but discovered little. Not too much later, Shane came back, and told us that we needed to check out the mystery machine before leaving . I gawked at him not understanding the reference for a second or two. Well, he wasn't kidding, and all I can say is it was pretty special to be there with two infamous vehicles in proximity. Without anything else to distract my Dad, we made decent time all the way to my Aunt Rachel's house in . The bus pulled into the city around 4:00 pm, which seems to be rather standard, and we spent an hour at the Mary Riley Public Library down the street from Giants grocery. Not only is this a special place for being so close to the a store frequented by fairytale creatures, the Library has an incredible story. Rather, the story is inspiring, but not altogether new: Mary was a remarkable woman who devoted flesh and bone to making sure folks around had access to literature, so the branch was named in her honor. Thanking Mary in my mind, each of us settled in. Before I had even made it past my book's introduction, a librarian on the loudspeaker announced it was closing time. As we packed up to go, I had the thought that a perfect demonstration of the pervasive magic of books is the way time behaves in the buildings which house them. 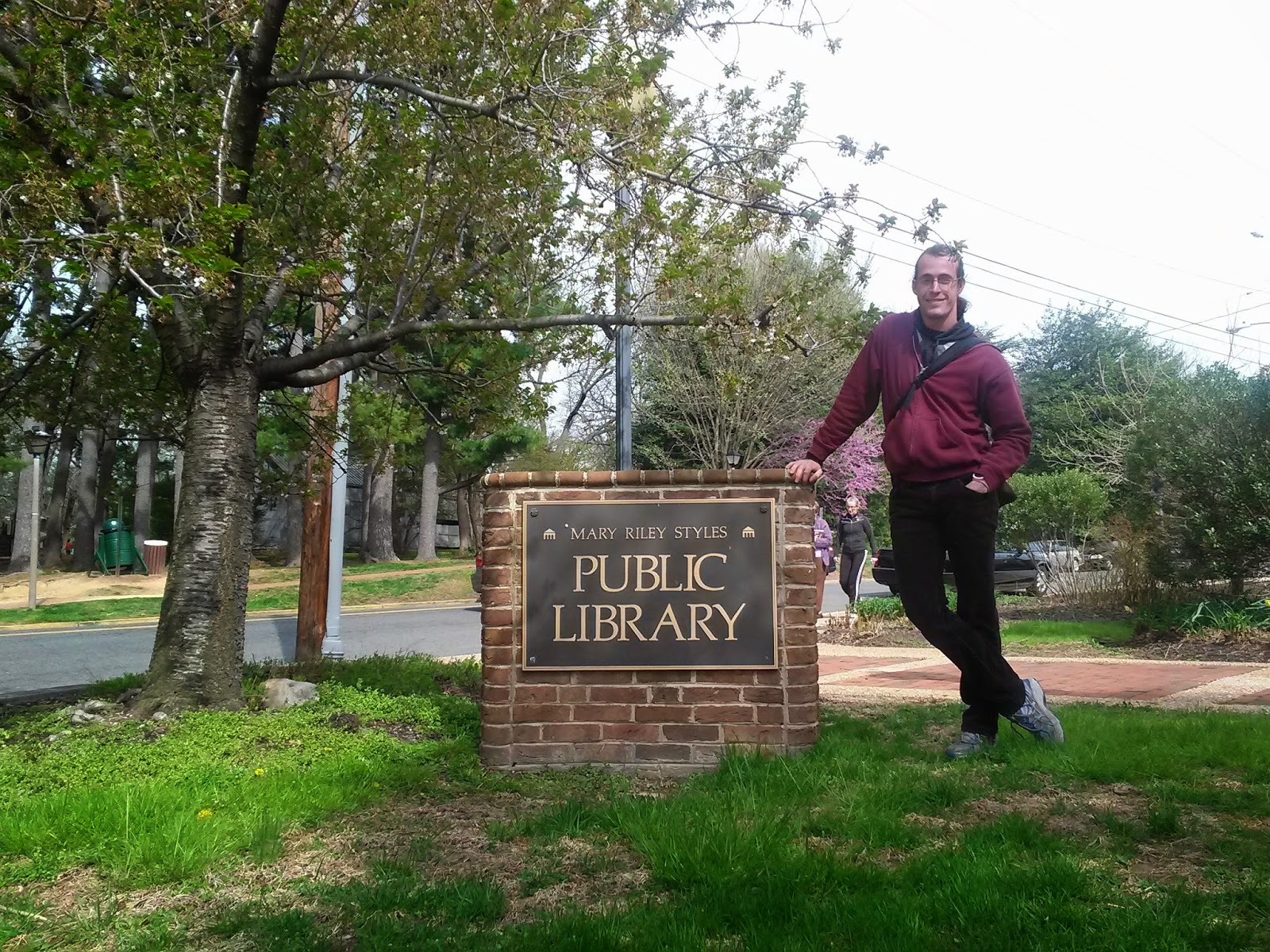 Anyways, we left the library and steered to our resting place. Currently, the air carries a hearty aroma, and Shane is prodding me with the hope he might dislodge me from my writer's trance to come eat dinner. I think I will end things here, and another day goes! 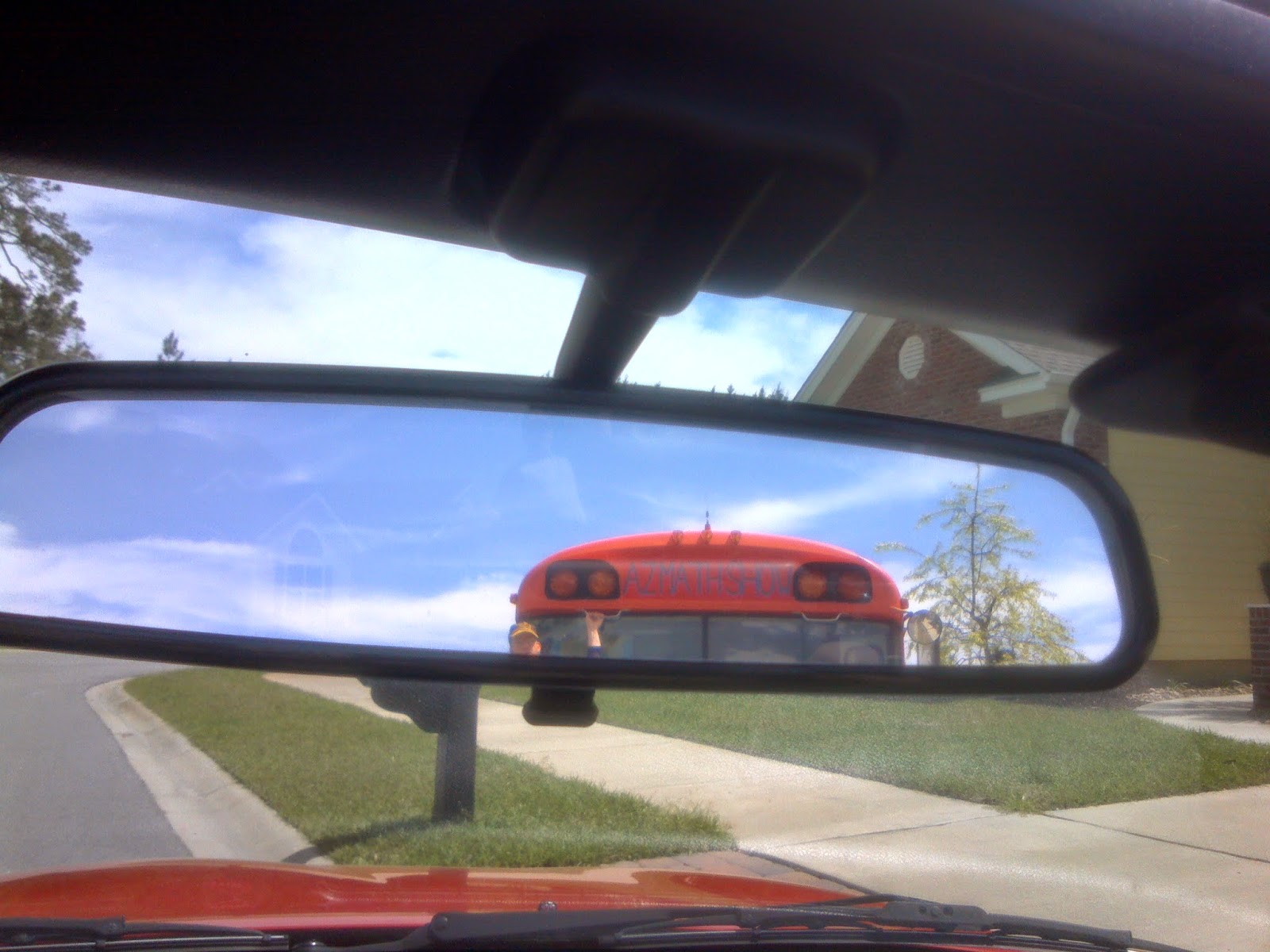 Before driving out of , Shane's Aunt's husband Henry humored Shane's request that we might get a photo of the front of the bus in Henry's car's review mirror. Now, why would we do something that would force me to use so many possessives to describe? Well, I'll give you the background, but I want you to try to figure it out: while we were stranded in I had a clever moment as I watched my Dad adorn the back of the bus with three words; once he finished, I painted “WOHS HTAM ZA ” on the front above the windshield. Do you understand?

Three separate things occurred today that have me convinced I'm being haunted by Harlan Ellison: I was reading one of the comic books Shane carries with him on his hard drive and a particular issue contained an introduction by Harlan; when I got to the library I checked into a catalog computer, only to discover that the last person had been searching for books by, guess who, Harlan; on the way to getting groceries, the directions I was using steered me down Ellison street for .3 of a mile. However, I'm not excessively alarmed.
Posted by Dolly at 10:40 AM