Tuesday 6 May: Bruce is blogging for the first time!  I woke up as the sky in the East was beginning to lighten - a habit I acquired from my high school teacher wife Elena. Shane and I were in the Bus at the home of Anne Tisdale-Ashford and her husband Jonathan in Concord MA - very close to Boston but far enough to be set out in beautiful farm country. We slept extremely well after last night's supper of a delicious "country chicken" stew - warm in our sleeping bags even though the outside temperature was predicted to be in the 30's. 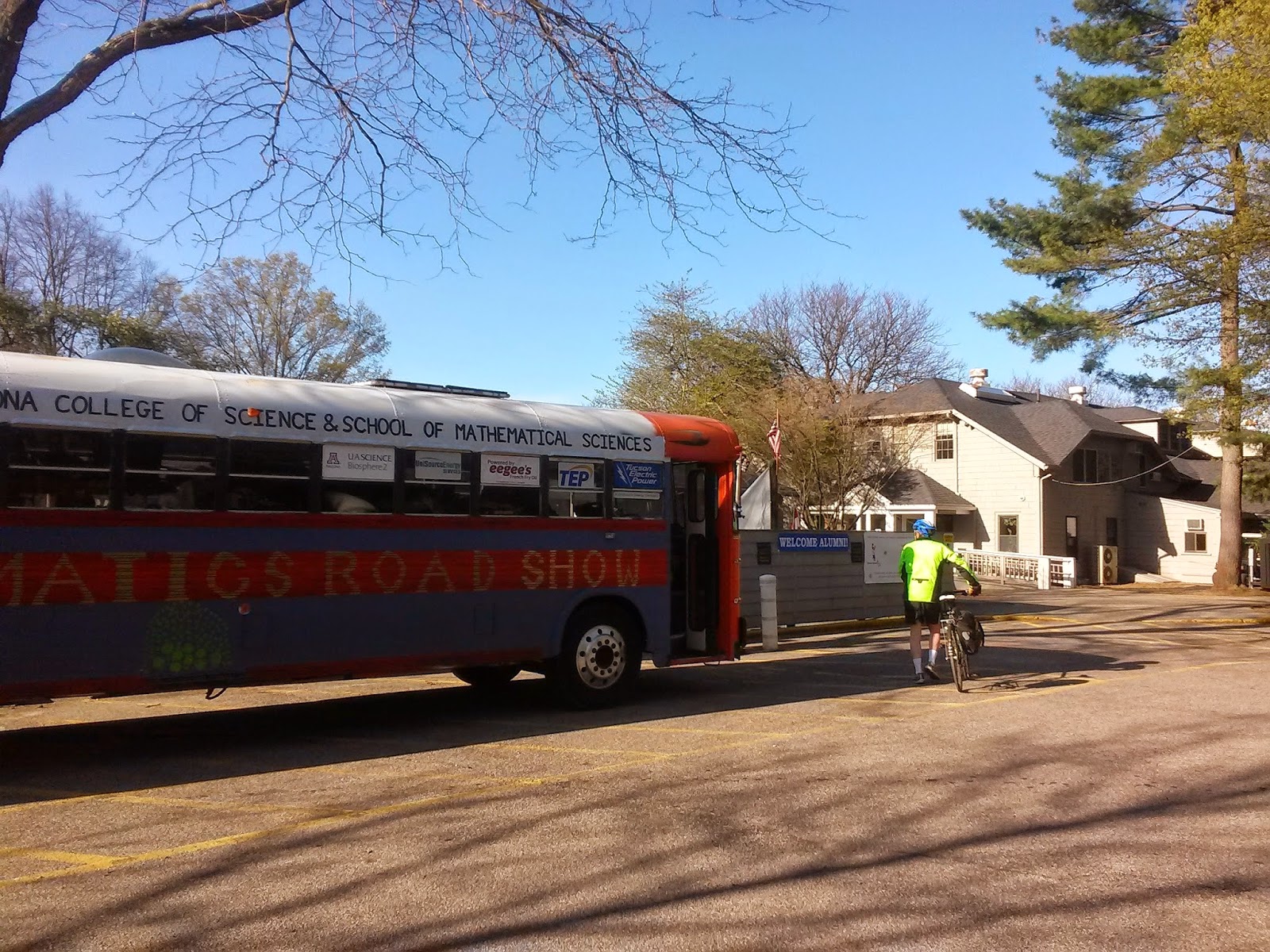 It wasn't fun getting out of warm sleeping bags in the pre-dawn chill, but I felt that it would be good to start earlier than later, as Boston rush hour has the reputation of being tough. We got started around 6:30; traffic was already busy on Route 2 East but not yet congested. Unfortunately the vegetable-oil fuel system was!  It turns out that on cold mornings, the oil is reluctant to move quickly, even with all our heat exchangers, and on the first big uphill the engine shut down. Not very convenient!  But it as a matter of moments to coast onto the shoulder, and a couple of minutes to re-prime the fuel system - then we drove the rest of the trip on regular diesel fuel.
We arrived at the Shady Hill School before most of the staff, but Kim found us and put us in the capable hands of Tim, who showed us where to park and unload. Well worth getting there before parents started arriving and dropping off children!  Our host Erika helped us get set up, and we were warmly welcomed by Mark, Alison, and many more teachers whose names went in and out of my head. Our venue was the venerable Assembly Hall that appeared to date to the founding of the school 100+ years ago - high ceilings and massive beams, it was the most majestic room we've presented in on this trip.
The presentation itself was delightful - about 250 middle-school students in grades 5-8 sitting on the wooden floor. This can be a difficult age range if there's any tendency among older students to be more concerned with whispering to their friends than watching the experiments. But not this group!  They favored us with our attention from the first moment and got more and more into the presentation as it progressed. Afterward a teacher (whose name I forgot) said that having the middle school students on the same campus as the elementary grades encourages the older kids to adopt responsible behavior as models for the younger ones. I'm not sure if this would happen everywhere, but at Shady Hill it works just fine.
A note of thanks to our sponsor: THANKS to Lee Herbst for connecting us with Shady Hill School!  You should be receiving some appreciative letters and emails from students and teachers. 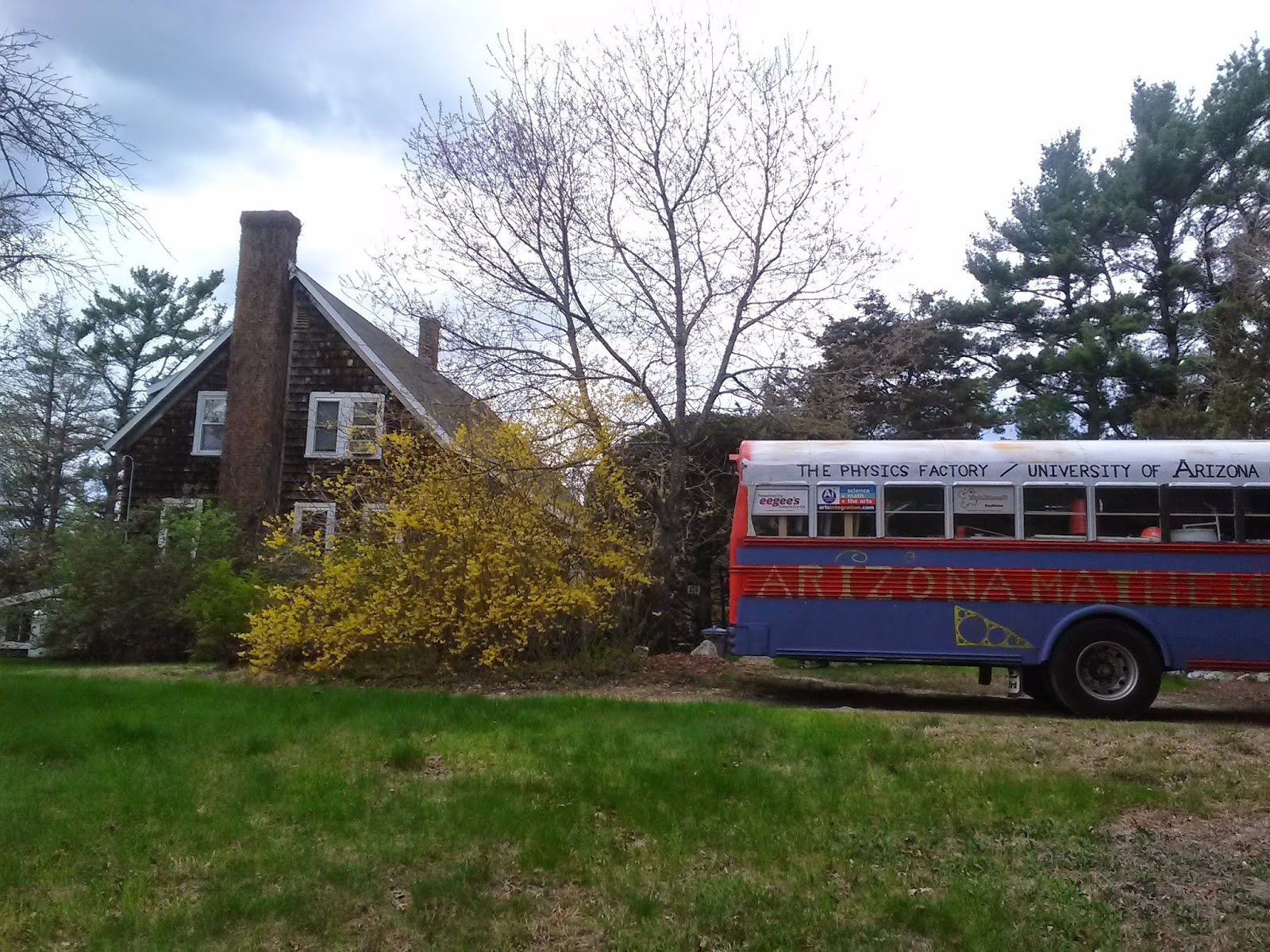 From Shady Hill we drove south to the rural town of Pembroke, home of Dolly's friend Richard Edlund. Like Dolly, Richard is a graduate of the Boston Museum of Art School, and he had a distinguished 30 year career in commercial art - the Pep Boys logo of Manny, Moe, and Jack being one of his better-known designs. In retirement he drew the whirling-bus logo of the Arizona Math Road Show that we are sure will become just as famous!  Richard's house is a vortex of creative energy, full of his artwork and musical instruments - plus a bust of the cartoon character The Tick, created by Richard's son Ben! 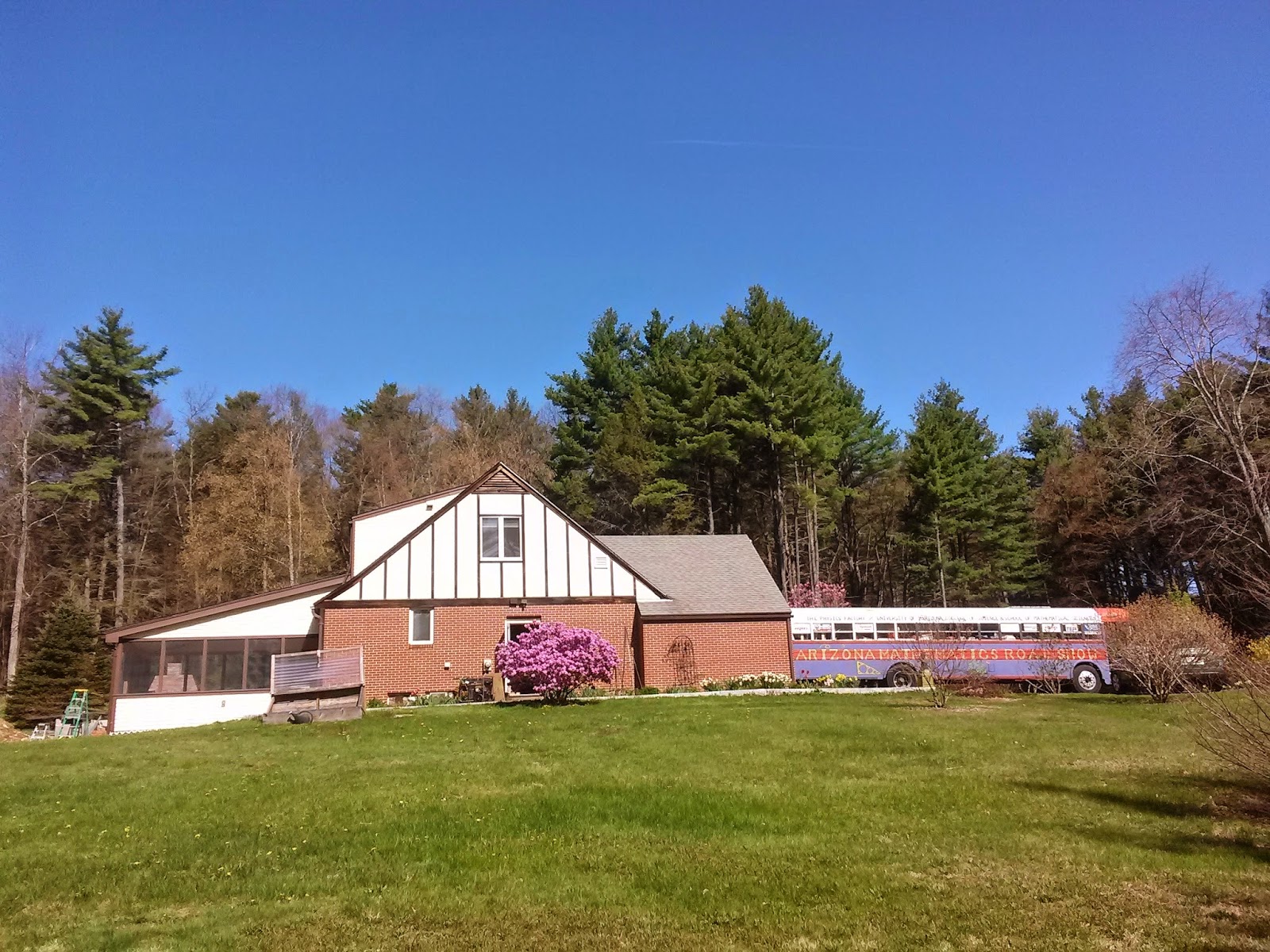 We tore ourselves away to start - finally! - our journey westward back to Tucson. We had been graciously invited to stay with Robin Sherman, a college friend of Bruce's wife Elena Martin. Robin and her husband Rob live in a lovely renovated farmhouse in Deerfield MA, in the foothills of the Berkshires. We wanted to help her prepare dinner, but she firmly directed us to stay on the spectator side of the kitchen counter. Just as well, as she whipped up chili and cornbread in a controlled whirlwind of activity that we could not possibly have survived!  However she did let Shane bake his trademark oatmeal-chocolate chip cookies afterward - on condition that he replace the chocolate chips with cranberries in half the batch. Not a bad bargain!
With the early start and nonstop activity throughout the day, plus the wonderful supper, we could not stay awake until Rob came home. Robin set us up with extremely comfortable beds, and we slept extremely well.